PM Modi pays tribute to Shinzo Abe, and says, “Today is a day of irreparable loss and unbearable pain for me.” and declared one day of mourning on 9 July as Mr. Shinzo Abe is no more.

Prime Minister Narendra Modi pays his high condolences to the late former Ex-Prime Minister of Japan Mr. Shinzo Abe on his sudden tragic demise and PM Modi remembered his contribution to expediting India’s progress story with Japan’s help. He announced a day of nationwide mourning as a mark of most profound respect to Abe, he declared one day of mourning in the country on 9 July. PM Modi recalled the immense relationship between India-Japan and the huge contribution of Abe to elevating India-Japan relations to the extent of a Special Strategic and Global Partnership.

PM Narendra Modi also tweeted, “Today, whole India mourns with Japan and we stand in solidarity with our Japanese brothers and sisters in this difficult moment”. He also added, “During my recent visit to Japan, I had the opportunity to meet Mr. Abe again and discuss many issues. He was witty and insightful as always. Little did I know that this would be our last meeting. My heartfelt condolences to his family and the Japanese people”. 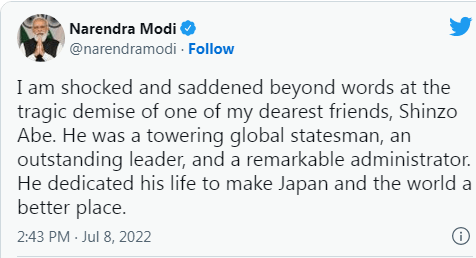 PM Modi said his relationship with Shinzo Abe went back from many years ago and that time he got to know him during his tenancy as CM of Gujarat. He also said that “Our friendship continued after I became PM. His sharp insights on economy and global affairs always made a deep impression on me”. President Ram Nath Kovind also twitted on this, “He was a great statesman, and his infectious affability endeared him the world over. That he fell prey to an assassin’s bullet is a tragedy for the whole humanity”.

Union Home Minister Amit Shah described Shinzo Abe as India’s “value friend”. Shah also twitted, “Pained to learn about the assassination of the former PM of Japan and India’s valued friend, Mr. Shinzo Abe. His efforts in strengthening the India-Japan relationship will always be held fondly in our memories. My deepest condolences to his family, followers & the people of Japan”.

Govt. Jobs Alert On EmailBe the first to get government jobs notifications and update alerts.

By subscribing to our email alert, you get prompt on recent government jobs notification release and any update on current job notifications.